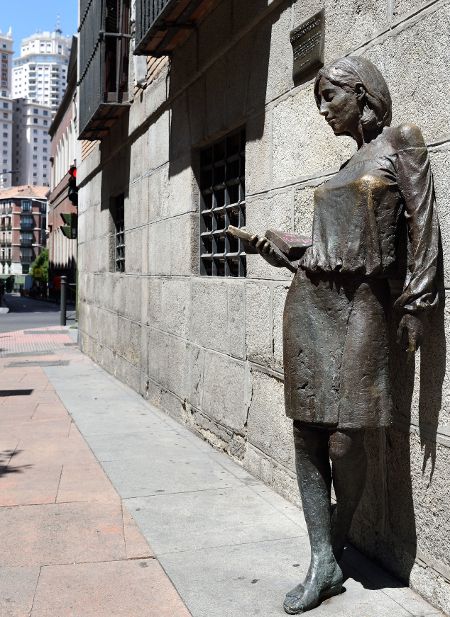 The legend of Julia the student comes directly from the neighbourhood of Malasaña and that will take you to the 19th century with all its secrets.

On a Saturday night, walking through Malasaña neighbourhood I ran into someone. When I turned back and looked around I saw a student girl leaning against the wall like if the time just stopped. I decided to go a little bit closer without even thinking that I would come back a few centuries ago and enter in a city legend full of optimism and courage.

This is Julia the student of Malasaña; a real size bronze sculpture. We can see that she is over Bauer carrying some books on her right arm. She’s wearing summer clothes. Just next to her, on the wall, we can read some inscriptions: “A tribute to the former University of Madrid. This sculpture was inaugurated on April 12th, 2003 thanks to an initiative promoted by the Municipal Housing Company, Caja Madrid and the faculty of fine Arts of the Complutense University. Work of Antonio Santín.”

The question we can now ask ourselves is why this work is called “Tras Julia”, in English “After Julia”. Here comes the
explanation. This statue is much more than a simple sculpture. It’s a legend from the XIX century, time in which women weren’t allowed to go to the university, to study. Only men had this opportunity due to the really full of inequalities society, specially unequal between men and women. The role that women used to play in the society has nothing to deal with their condition nowadays. This is the reason why Julia, a really courageous woman, decided to dress up in men clothes to be able to go to the university and so it was decided to award this courage by giving her this tribute.

But on the other hand, some others say that this sculpture actually does not represent Julia but Concepcion Arenal, a woman that around this time (in 1840), decided to dress as a man to be authorised to study at the Central University of San Bernardo Street here in Madrid.

And finally the artist, declared on his personal website that “After Julia” is a tribute to the Old University of Madrid.

So as you can notice; this statue is full of stories. Whatever the story behind is she has lived a lot of  a few experiences since it was installed in Pez Street although some of them were not so good. In 2010 the sculpture suffered vandalism, some people painted and destructed some parts of the statue. This is why Julia had to be cut (to separate it from the base) to be repaired. It only reappeared after 1 year and since then she has spread life to the Malasaña neighbourhood.

So as we saw, “After Julia” is not a random statue and also not the only one you’ll see in Madrid. You’ve also probably seen “la paseante” (“the stroller”) at Palma Street or “la joven caminando” (“the young woman walking”) at San Idelfonso
square. If not, you should walk around to find them and luckily ran into the legend of one of them.

If you want to know more about Julia, or discover some of this statues, or get closer to know Madrid, we recommend you not to miss this free walking tour Madrid.