Saint Jeronimo cloister , the hidden jewell that hosts a lot of important masterpieces of Prado Museum.

You probably already know the famous Prado Museum, either by name or because you’ve been there to discover its collections of some of the world’s most beautiful paintings and sculptures.

But are you sure you’ve seen everything?

Because on the top floor of the Jeronimo building, if you take the escalators, you will find a completely reconstructed cloister inside the museum itself.

It’s a real baroque cloister, which was once part of the monastery of San Jeronimo el Real, adjoining the flamboyant Gothic church that you can still admire today behind the museum. (and about which we spoke some time ago on this same blog.

This monastery, built by the Habsburg kings, originally had two cloisters, the oldest disappeared in the 19th century. The second one, more baroque, designed by Fray Lorenzo de San Nicolas, is called today ” Saint Jeronimo Cloister “. Although affected by numerous changes of ownership and left in a very neglected state, close to collapse, this cloister was finally restored and rebuilt to incorporate the extension of the Prado Museum in 2007.

Today we can see only the interior facades, which show the characteristic architectural style of the Habsburgs, an austere style strongly influenced by the monastery of El Escorial, and its typical material of Madrid: granite.

But this cloister was narrowly saved. Partially destroyed during the Spanish War of Independence against the French (1808-1814) and condemned to destruction in 1857, it was finally declared National Monument in 1925.

It was during the elaboration of the Prado Museum’s extension project at the very end of the 20th century, which had become too small to accommodate its exhibitions and its growing public, that it was decided to dismantle and reassemble the cloister block by block inside the new dedicated building. The architect Rafael Moneo was commissioned to create an entire campus dedicated to the Prado; its collections, offices, workshops and exhibitions, using the neighboring buildings, remnants of the old Buen Retiro Palace (namely the Cason del Buen Retiro, and the Salon de Reinos).

Then they had to study, restore, and recreate stone after stone the aspect of the cloister. In all, 2,820 blocks of stone were transported to the restoration workshops in Alcala de Henares and then reassembled in the new extension to be seen by the public.

And this part of the museum is not lacking works of art… You will discover a set of marble and bronze sculptures made by the Italian sculptors Leone Leoni, and his son Pompeo. They represent the family of Emperor Charles V; his wife, Empress Isabella, his sisters, Mary and Eleanor, and his son, the future Philip II. The sculptures were not completed at the time of Charles V’s death in 1558, but they will be completed posthumously. They are a perfect illustration of the tradition of royal portraiture under the Habsburgs, which is found in the paintings in the museum (Titian, Rubens, Velazquez, etc.), characterized by distance, dignity, and an ideal of perfect beauty. The fineness of the details of the outfits and the meticulous work of the bronze show the mastery of the sculptors. 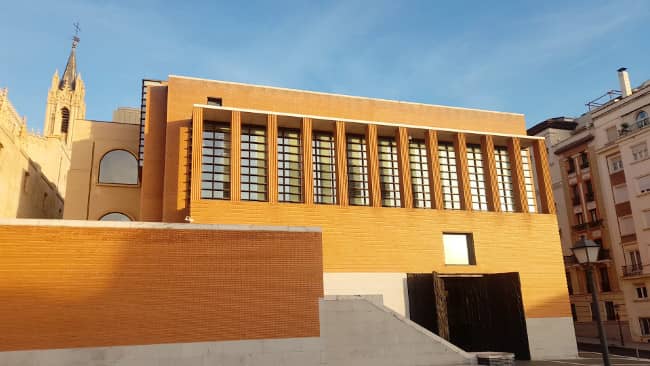 On your next visit to the Prado, take a look at the cloister of the Jeronimos, a quiet place, ideal for resting among the thousands of works of art in the museum. Also take the time to pass by the exterior extension, the beautiful church of San Jeronimo and the museum’s hanging gardens, you will also see the monumental black bronze doors of the new cloister, work of the sculptor Cristina Iglesias.

And if you want to know more about the Prado Museum do not miss our free tour Madrid ! Vive Madrid Tours will soon offer a guided tour of the collections, keep an eye on our news!