Did you know that there is a little piece of Egypt in Madrid? In today’s article we are talking about the Temple of Debod, a jewel from the 2nd century BC.

First of all. What is an Egyptian temple doing in the center of Madrid? The Temple of Debod was a gift from the pharaonic country to Spain for contributing to the UNESCO’s request for help in 1968. The Nubian temples were at risk of being flooded and damaged by the construction of the Aswan dam. During the works of the first part of the dam, around 400 temples were flooded with water 9 months a year, and the Nile is not precisely a small river. One of the temples that was saved was the very famous Abu Simbel.

Subsequently, the Egyptian government sent four temples as a gift to the Netherlands (temple of Taffa in Leiden), the United States (temple of Dendur in the Metropolitan of New York), Italy (temple of Ellesiya in the Egyptian Museum of Turin), in addition to the temple of Debod to Madrid. Out of the four temples, the one in Madrid is the only one exposed in open air, and therefore to pollution and weather. There are voices calling for it to be covered to prevent it from irreversibly degradation.

Finally, the complex was inaugurated in 1972 after two years of reconstruction. The process was slow and complicated as some stones were spoiled when the temple was dismantled and during the transportation. Moving some 1,300 ashlar blocks over 3,000 kilometers was more or less the easy part. Reassembling the puzzle with the poor blueprints, erased block numbers, and the remaining photographs was another story.

Inside there are explanations about hieroglyphics and information about ancient Egyptian mythology and society. On the top floor there is a wonderful model with the temples that were saved and explanations about the transfer operations.

Not long ago it turned 50 years old but paradoxically it is the oldest building in Madrid. It was erected around the year 200 BC and was decorated later. It comes from the Ptolemaic era. Ptolemy was one of Alexander the Great’s generals. He was king of Egypt and made Alexandria a great city. It is also known as the Greek or Diadochi period. The famous Cleopatra would be the last sovereign of this dynasty. However, most historians believe that the Nubian king Adijalamani of Meroe had much more relevance, either in its construction or in its decoration. 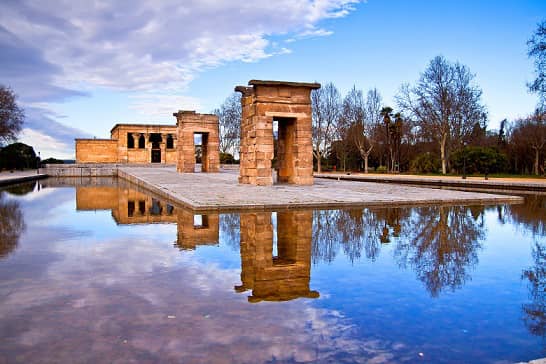 And we cannot forget that for the people of Madrid it is one of the most beautiful places to watch the sunset. The entire western area of Madrid, from the Almudena, the Royal Palace, the Parque del Oeste or Las Vistillas are good point of views, although the Temple of Debod on its mountain offers a privileged perspective of Casa de Campo, Boadilla, Pozuelo or Somosaguas.

If you want to know more about this area of Madrid or about the mysteries that the Villa y Corte holds, do not hesitate to sign up for one of our Free Tour Madrid .

Calamari sandwich: why is it the most typical sandwich in Madrid?
The Chamberí "Ghost Station" of Metro de Madrid
Casa Labra and the foundation of a political party
posted under: Art, Culture, Curiosities, History, Madrid