On the day of the uprising of the Madrilenians against the French, May 2, 1808, a group of honest prisoners from the Madrid jail starred in one of the most curious events of the day.

Today we will briefly talk about a building and a curious episode that the prisoners of the Madrid jail staged in it during the heroic day of the uprising of the capital against the Napoleonic troops.

The Palacio de Santa Cruz is one of the most emblematic buildings of Madrid de los Austrias. It is located in the Plaza de la Provincia, a very pleasant square next to Plaza Mayor at the beginning of Atocha street. The palace dates from 1629 under the king Felipe IV. It has been the Palace of the Audience, the Ministry of Overseas, the Ministry of State, the Hall of Mayors, it is today the Ministry of Foreign Affairs but what concers our story in this post, it was the Royal Jail.

The old Casa de la Villa, which would be the city hall of Madrid until 2007, could not cope with so many prisoners. So there was a decision to build this new building in “herreriano” style similar to the previous one. Some illustrious prisoners were Lope de Vega (in the previous one), José de Espronceda (romantic poet), Rafael Riego (liberal general at the beginning of the 19th century) before his execution in the Plaza de la Cebada, Luis Candelas (the madrileño Robin Hood) or the politician Pascual Madoz, famous for his great confiscation of 1854.

On May 2, 1808, the day of the uprising against the Napoleonic troops, the jail lead a curious and epic episode: the prisoners asked to go out to fight. This has an epic reading (the lowest of the low defended the national sovereignty with their blood) and an exceptic reading (grotesque, somehow comic but but a rightfully true one).

At half the morning, with the city turned into chaos, the prisoners asked to go out to fight with a letter.

Seeing the commotion that the prisoners were making asking for sticks or irons the prison director decided to set them free. Of the 94 prisoners, 38 stayed and 56 went out. It is easy to imagine them as honorable and pious citizens, epithome of virtues. They stormed out of the jail towards the Plaza Mayor. There was a French cannon lined up towards Toledo Street. The prisoners killed seven Frenchmen, turned the cannon towards the cavalry squadrons charging from the Puerta del Sol, ran out of ammunition, disabled the cannon, and broke out. There was one dead, one seriously injured, and two missing went missing in action, although ccording to sources, they also were killed. 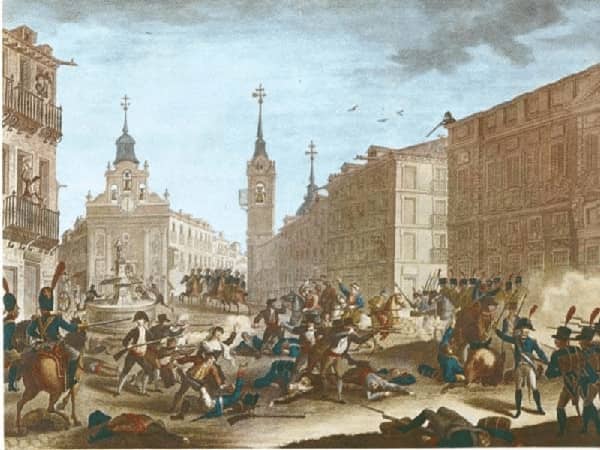 The best of all of this is that the 52 remaining prisoners went back to jail in small groups during the night and the dawn the next day. All but one that was fugitive. Several of them were drunk and carried french rings, coins, weapons, and other spoils of war.

Even criminals can be trusted sometimes. If you want to know more about Madrid and some episodes like this one, the Dos de Mayo, or the Palacio de Santa Cruz, do not hesitate to join one of our free tour Madrid .

The houses of Historic Madrid. How did our ancestors live?
The Traditional Madrid. What`s the origin of our identity?
Chocolatería San Ginés | A Historical Place
posted under: Culture, Curiosities, History, Madrid