According to their own and oblivious writings, our great Golden Century writer left us a lot of funny stories that were proof of his sharp ingenuity and that gave birth to a lot of the anecdotes of Quevedo that we will discover together today.

Quevedo (1580-1645), the conceptism master of the Golden Century of Spain, was the most controversial writer of his time. In full struggle to become the greatest Spanish-language writer of all time, Quevedo found an important source of inspiration in the clash against other great writers with whom the throne was disputed.
He also did it through the funny experiences in which he was forced to show his acute wit and that today we know as the anecdotes of Quevedo.

Very well known is the one he had against  Luis de Góngora (1561-1627) the maximum exponent of the culteran current that was so opposed to the simple, precise and ingenious style of Quevedo.

Unfortunately we don’t have enough lines to explain it the enemesty properly. Nevertheless we invite you to learn the details of this visceral feud in our Free Tour Barrio de las Letras . You can’t imagine how big the hate between these two writers was.

Today we will tell you some others anecdotes of Quevedo that are not so well known but are pure evidence of the live ingenuity of our great writer. 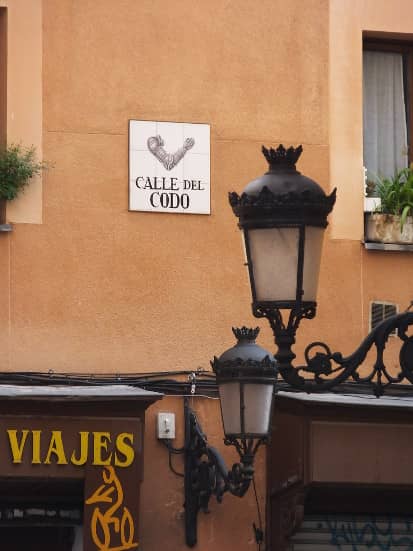 This story tells that, in this quiet Madrid street of the Austrias that links the plaza del Conde de Miranda with the beautiful Plaza de la Villa, Quevedo established his headquarters to urinate every time he went out around the nearby bars of the area.

The tranquility and narrowness of the street, or perhaps just the desire to disturb, made that every time he went out partying, which was quite oftenly, Quevedo chose the door of a neighbor of this street for such a must. 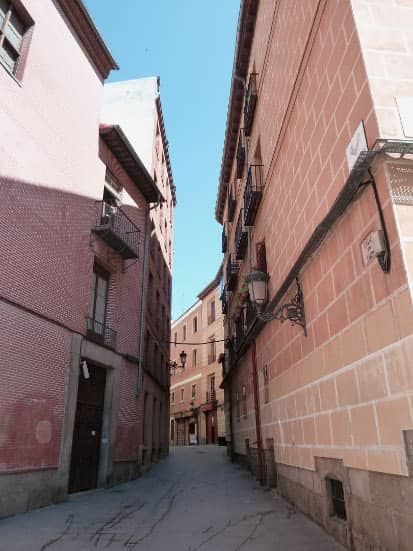 Tired of that situation, the neighbor plan to end it. And for that, in the place where ′′ that wretch ′′ urinated, he will draw a cross. His idea? That when he was about to urinate at the door of his house, when seeing the symbol of God, that incivic inhabitant would suppress his eschatological intentions.

The following night, with the end of the party, Quevedo headed to his favorite corner of the Elbow Street to practice his ritual. Upon arriving, he observed surprised, how someone had the detail of drawing a target for him to practise his aiming.  So, thankful, he’ll test his skill and go home to rest.

The next morning, the neighbor will wake up impatient, eager to see if his cool strategy had turned out. So in a hurry he’ll get out of bed, open the door of the house and… surprise! There it was Quevedo’s good morning waiting for him to say hi!

After cursing his fate furiously, he rewrote his strategy: He will accompany the cross of a paper in which it could be read:

On this time, there were no doubts for the interpretation of that symbol. The day will end, and the man will go to sleep eager to check the success of his refined plan.

But just fall asleep, Quevedo will appear drunk on Elbow Street in his determined intentions of every night. Upon arriving at the neighbor’s door he’s going to find the note he had left him. Surprised, and making a great effort to focus, he deciphered the content of the message. After a second doubt, he’ll decide to stay true to his original intentions and urinate the target and the poster with a generous urination.

And, moreover, he will decide to leave a note of reply to that incivic neighbor:

He called the Queen lame… being him lame too

Another of the anecdotes of Quevedo was to call the queen of Spain lame. Mindful and subtlety,

This story tells that one crazy nights with his friends, and after a busy dinner where wine and beer did not miss, the challenges and bets surfaced at a time. And one of them splashed on Quevedo:

– Quevedo! You, who from time to time,  visit the Court as a poet. You do not dare to call the queen lame “. All over the town it was known that Queen Elizabeth of Bourbon was lame.

Quevedo stayed pensive, meditated the challenge for a few seconds and answered:

And so the next day when he headed to the Palace to meet with the Kings, he appeared on the queen’s throne carrying a carnation in his left hand and a rose in his right hand, and approaching her he will say:

“Between this carnation and this rose,

In English it is nonsense, but in Spanish the word “escoja” which means “choose” if it is split like this: “es coja” means “is lame”. Phonetically there is no difference. Was not Quevedo a bright mind?

And like these anecdotes of Quevedo we have many more. We invite you to come and discover them in the places of Madrid where these took place on our free tour Madrid .

Don’t miss them and discover everything Madrid hides in their corners!