The viaduct of Segovia is a spectacular concrete work that connects the area of Las Vistillas with that of the Royal Palace.

It seems that this idea must have a certain republican flavour, since the first known project to unite these two areas is from the Napoleonic era under the reign of José I Bonaparte. At that time the urban planning of Madrid was to be modernised, but the project of the viaduct of Segovia would not be carried out until much later.

The first iron viaduct was inaugurated in 1874 during the First Republic. In 1930 this iron bridge was demolished and the one we see now was built in 1934. And by the way, with trams.

The current viaduct was built in the 30s during the period of the Second Republic, being the only remaining civil construction from that time. Miraculously, the viaduct of Segovia suffered little damage during the war and instead of being demolished and building a new one, it was kept as an easier solution. After three years of badaboum, you can imagine that there was little money for public funds.

Popular legend says that the person who inaugurated the first viaduct in 1874 was Pedro Calderón de la Barca, whose body crossed the viaduct without finishing completely in a procession of five carriages. His body was moved from San Francisco el Mayor to the church of San Nicolás. If you want to see the route on Google Maps, you may find that they were right to ask for permission to use it before its official opening. By the way, the remains of Calderón de la Barca have been moved up to six times, and currently we do not know where they are exactly. During the Civil War, several milicianos set fire to the church that held his remains and the parish priest hid them in one of the walls. Or so it is believed since they have never been found.

If you want to know more about the greatest writers of the Spanish Literature do not miss our Free Tour Barrio de las Letras Madrid .

The viaduct of Segovia also has a bad reputation for being known as the bridge of suicides. There are methacrylate screens since 1998 to prevent people from jumping, since in the 90’s, it was common to have two or three suicides a month. The first viaduct in 1874 had the same reputation, having its first suicide a week after its inauguration and the second only eight days after. A stuntman died during the filming of the 2002 movie Canicula. When performing a jump, there was a problem with the length of the rope and the actual height of the viaduct. There is also a rumour about Baldomera Larra, daughter of the writer and journalist Mariano José de Larra. She was a pioneer in the business of pyramid scams and she used to tell her innocent clients that in case of bankruptcy, they had to “jump off the viaduct.” Good as a guarantee of her business. 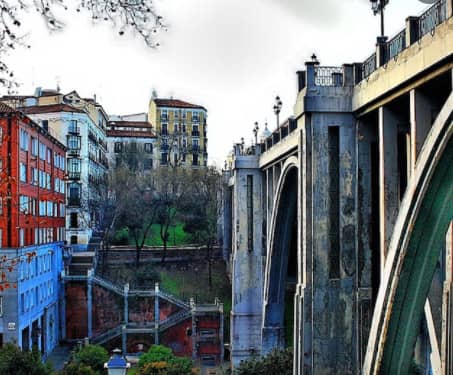 Nowadays the viaduct is crossed by Segovia street below to reach the Puerta del Ángel, Madrid Río, and the southwest or Extremadura highway. Also just crossing it from the Royal Palace we arrive at the area of the old Morería, and very close to the viaduct itself is the Beatriz Galindo street, the real name of the woman called La Latina, as well as the historic Fuente de los Caños Viejos, which has the oldest stone cote of arms in the city.

If you want to discover more about Calderón de la Barca, La Latina, José I Bonaparte or the Royal Palace, do not hesitate to join our free tour Madrid .

La Paloma Festivity and the Chotis
The Prisoners of the Royal Jail and the Second of May of 1808
Restaurant Lhardy - Faithful guardian of Madrid' gastronomy
posted under: Culture, Curiosities, History, Madrid