Madrid’s transformation into Capital in 1561 marked a change in history and urban redesign of the humble villa that made the most important nobility to reach the capital and build imposing palaces in the city centre. Today we found out where the nobles lived in Madrid.

The first thing we have to clarify is that the nobility were the first rich and powerful people who arrived in Madrid when the little village became the capital of the Spanish Empire with Felipe II. As you can imagine, these people were the ones who took all the most powerful and influential positions in the Royal Court and of course, they wanted to live as close as possible to the King, so they went to the areas just beside the old Alcazar de Madrid, the same place where the Royal Palace is currently located.

These people were called “Greate one´s of Spain”. This title was directly related to a specific style of luxury  life. With the passing of time, the positions they used to have in the Royal Court were more symbolic than usefull, as they made their living out of the rents of the landlords and  buildings that they had in the most important cities of the kingdom, especially in Madrid.

Until the beginning of the 19th century, this nobility people lived in the palaces that they had built in the centre of the city of Madrid. Palaces full of silver, gold and the most expensive decoration,  inside and outside the palace. They followed the French style, because it used to be the trendy one throughout Europe and  it was considered a symbol of wealth. These palaces  used to have the best of the best in any possible way:  massive gardens, paintings, sculptures…

Where did the nobility used to live in Madrid? 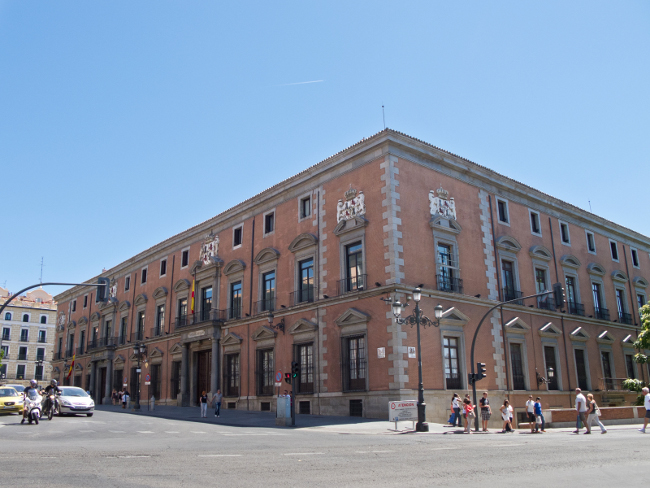 At the beginning, as we said before, as close as possible to the King, because they needed to always be on scene, on the spot where the action was happening.  They needed to be as noticeable and visible to the King as posible, so, besides the old Alcazar, the actual Royal Palace of Madrid (if you want to know more about it, come to visit on our Historical Tour!).

They built their palaces on lots that were available because of the different transformations that the capital was experiencing. After some time, the nobility changed the tradition and they started to build their palaces in other parts of the city as Arguelles, Recoletos, Salamanca… (so, have you seing any palace in these areas nowadays? Well, you already know why!)

How did their palaces displayed?

Those massive palaces used to have 3 floors. Downstairs, they had the kitchen and the horse stables with some other basic services. On the main floor, the big saloons where the family celebrated the receptions and parties, and also, the main rooms, and offices. And finally, upstairs, where the servants used to live (remember, this was before the lifts were invented, so the rich people did not like to take stairs).

But, of course, after the inevitable passing of the time, the situation changed for the nobility. These people lost part of their power and so the problems started to happened. They needed to keep living with the same luxury to prove they were part of those “Greate´s of Spain” or of the nobility but their earnings were going down and down .

The arrival of the Bourgeoisie

So, in this situation, a new kind of people started to rise little by Little, the bourgeoisie! New rich people without any nobility title! So, the old nobility had to accept and join these new rich people. Because of this, some of these palace landlords changed. We had new rich people owning old palaces all around the city. Lots of these places actually became factories, official government institutions, Royal Academies…!

Madrid transformation during the 19th Century

But the city was living an unstoppable change too. At the beginning of the 19th century, the old defensive wall build by Felipe IV in the 17th century was gone! So the city could expand in every direction! So, after all these changes, we have to talk about a key year in the organization of the city: 1836.

In that year, the government approved a major religious confiscation. So… we had free lots in town again! The government’s idea was to build houses for ordinary and poor people, but instead… the rich bought those lots in the gubernamental bids and built their new palaces.

But finally the common people had their go in 1857. In this year, the Ministre of Public Building approved a project to open the space in the city centre, create more free areas, green parks, house maps. A proyect that in the 1898, became a reality, but that also meant the lost of lots of historical buildings (like the first church, or Sto. Domingo monastery if you want to know about those building, come to visit us in the Free Tour Madrid Old City and Tour Legends and Mysteries Madrid !).

This is how the nobility and the richest ones lived in Madrid and this is how the city changed and became the capital we all know nowadays!

If you have found this part of our history interesting and you want to know more about the city of Madrid, we are waiting for you in our Free Tour Madrid at Puerta del Sol square from Monday to Saturday to continue discovering all the good and beautiful things that this city has to offer!

Pulpit of Cuchilleros Arch and a heroic day for Madrid
Temple of Debod – A Egyptian Temple in Madrid
Madrid before becoming the Capital of an Empire
posted under: Culture, Curiosities, History, Madrid, Tradition