The vanguardist architecture of Fernando Higueras in Madrid during Franco times

At the Ruiz Jiménez roundabout, better known as “the San Bernardo metro”, it is almost impossible not to look at a certain imposing concrete structure, with balconies drilled like beehives from which jungle vines hang.

Although with different names, all Madrilenians know it. The San Bernardo building, “the military thing”, the Princesa building… Well, it doesn’t really have a name. There are 240 appartments, commercial premises and parking lots and it was commissioned by the Patronato de Casas Militares. The estate was previously the Inquisition Tribunal and later the Hospital de la Princesa (Princess’ hospital), demolished in the 1950s. Only few know its history. Let’s start with that of the man who designed it, and whose construction was the last nail in his coffin: Fernando Higueras.

Higueras was born in Madrid in 1930 and graduated as an architect at the Higher Technical School of Architecture in 1959, in a promotion leaning towards distancing itself from rationalism and approaching organicist currents. Interesting human being without a doubt, he was a fine painter, composer and photographer, a man of the Renaissance that excelled at everything he touched. He was an outcast during the Franco regime, who considered him a “red”, and a fascist for the reds, since he worked for the Francoists. His study was important but tremendously neglected from the academic point of view, especially by later generations. He died in 2008, very lonely, por, as there is nothing like wasting talent and excellency with cainism.

His heterodox proposal of concrete with vegetation on the facades was intended as the idea to create an oasis within the city, with a perimeter block that created a green and bucolic internal world. The project is separated into two blocks, A and B, by Santa Cruz de Marcenado street, and each one is adapted separately. The interior square allows to receive the light of noon, and below ground there are four perfectly ventilated and naturally illuminated parking floors through four huge circular patios. The vegetation is free to take the place.

As we enter block A, which overlooks the San Bernardo roundabout, the noise of the cars from San Bernardo and Alberto Aguilera streets suddenly dissapears. The vines have taken over and the temperature is even more comfortable indoors. Apart from the glass, the only constructive element is the concrete, which traces circles from the top floor to the patio, becoming wider and wider until becoming an underground garage but open to the sky. The most visible part that faces the square outside is curiously the smallest. We are in an idyllic hive of terraces dotted with huge vines. We doubt that those who enter will brand Higueras as a madman.

If we stick to the Community of Madrid, his Works are also in Serrano 69, the church of Santa María de Caná in Pozuelo de Alarcón, Castellana 266 or the Historic Spanish Patrimony Institute.

We would like to highlight his studio and home, built in 1972 and called the “Rascainfierno” (hellscraper) since it is built…upside down, from the top to the bottom! 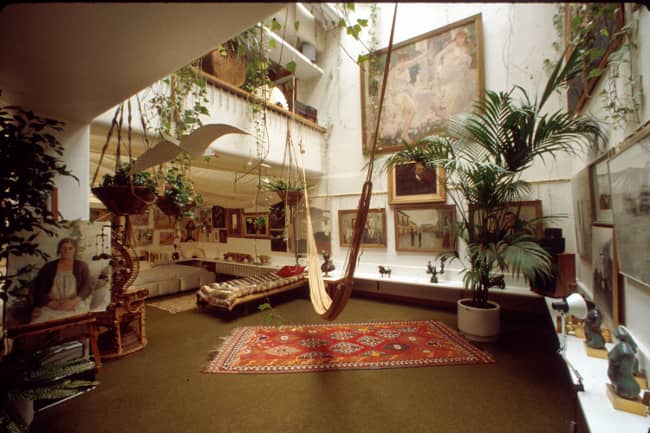 “I don’t have orders or clients and nobody knows me. I am aware that my toughest enemy has been me. The life I have and saying what I say has a price which is not having a job. But I am a billionaire in time ”.

We encourage you to look for more about the Rascainfierno and we invite you to visit Madrid with our Free Tour Madrid. Did we mention the Inquisition and something about architecture up there? The Leaf Madrid Tours team await for you with open arms.