Around the Royal Enclosure a wide number of statues dedicated to kings of the Spanish Monarchy have been emplaced. The most famous ones are the king statues in Plaza de Oriente but there are some others all over the Country.

The mole of the Royal Palace is one of the most impressive buildings in Madrid. Its sumptuousness, size, decoration are unmatched. Originally, the cornice was to be decorated with 108 statues of different kings related to the Hispanic monarchy. It is true that some kings can be seen on the balconies, eight on the ledge of the facade from Plaza de Oriente, some other king statues in Plaza de Oriente, but what about the others?

The construction of the statues began in 1743. At that time the Bourbons had been in Spain for a short time as the ruling dinasty after seizing power in the War of the Spanish Succession. Powerful speeches and symbols that legitimized the new monarchs were needed, so they sought to give continuity to the new kings by connecting them with the previous ones. A kind of “stone book” with all the kings dressed in the manner of the eighteenth century. Many of them also embrace a shield depicting the queen or mother.

The statues of the kings have been changing places. Officially we will say that the weight of so many statues could have been too much for the structure of the building, since each statue measures more than two and a half meters. In addition, the effect that caused to see the facade so full of statues was not as aesthetically beautiful as expected. If we look closely at the lack of quality of the king statues in Plaza de Oriente (yes, they are quite ugly), it’s easy to realise that they were going to be seen from afar. They certainly do not stand out for their refined technique, and it seems that the heads are interchangeable between one statue and another. If we get out of the official we have an unlikely but interesting theory.

Queen Isabel de Farnesio, wife of Felipe V, mother of Carlos III and a borderline paranoid, had a recurring nightmare. An earthquake shakes Madrid and the statues end with the royal family after falling on them.

Anyway it seems that at first not all the statues were at the top of the palace. Today you can see empty shelves or other decoration with the name of the missing king and the date of reign. 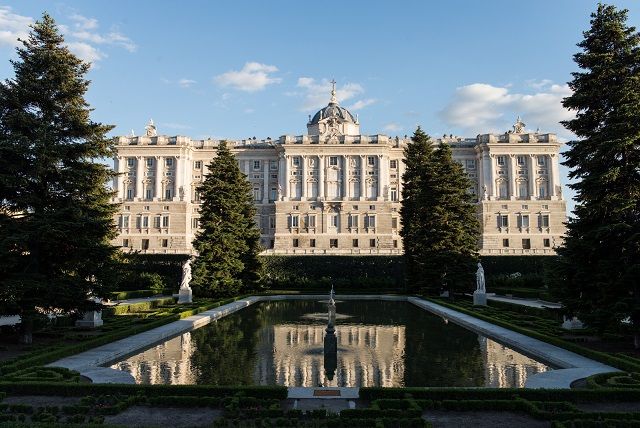 There are so many statues with so many kings because we must not forget that Spain in the Middle Ages did not exist as a state. There are the Visigoth kings, from Asturias, León, Aragón, Portugal, Navarra, Castilla, Galicia, or even from America. Representing the pre-Columbian civilizations we have Moctezuma, from the Aztec Empire, and Atahualpa, from the Inca Empire. They are even Trajan, first Roman emperor born outside of Italy and his successor Hadrian. The last king represented is Carlos II.

Where are these statues? They were distributed around Madrid in 1842 with Isabel II. Many were spread across other Spanish cities. Two in the monastery of El Paular, one in San Fernando de Henares, six in Toledo, eight in Burgos, four in Vitoria and eight in Pamplona. In Madrid there are 29 in the Royal Palace, 20 king statues in Plaza de Oriente distributed in two rows, 13 in the Paseo Argentina of the Retiro Park, another six nearby in front of the Salón de Reinos and eight more in the Sabatini Gardens. 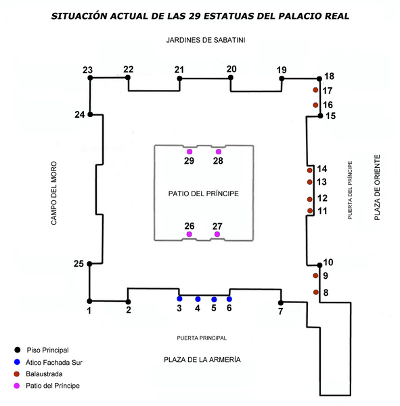 If you want to know more about these statues in Plaza de Oriente and the areas mentioned in the article, do not hesitate to join our Free  Tour Madrid both in the old city with the Tour de los Austrias, or in the new city with the Tour of the Bourbons.

Find out more or adjust your settings.