The commemorative plaque we find by the door of this apothecary located at number 59 of Mayor street, indicates that, being 1578 the year of its opening, the Pharmacy of the Mother Queen (Farmacia de la Reina Madre in Spanish) is the oldest shop in Madrid.

The origin of this pharmacy created in 1578 (only seventeen years after the establishment of Madrid as Capital of the Kingdom) is associated with a pharmacy on Sacramento Street that was opened by a renowned Venetian alchemist who worked for Felipe II. There are theories that claim that this alchemist acquired such prestige because in his youth he was in charge of administering drugs and concoctions to the French king Francisco I during his imprisonment in the medieval Lujanes Tower in the Madrid of the Austrians area.

Already in the 18th Century, during the reign of the first Spanish Bourbon king, Felipe V, this pharmacy became really famous. Apparently the fear of poisoning or other conspiracies in the Palace made the members of the Royal Family not trusting their own Royal Pharmacy located in the former Real Alcazar of Madrid, so they preferred to buy all their medicines in this other drugstore. This king was the one who gave permission to the pharmacy to use the royal shield, so that they could use it in their cans and boxes, as well as at the counter of the store. The name of the oldest shop in Madrid is also associated with Felipe V, although there are different theories on the matter: on the one hand, it is associated with his first wife, Queen María Luisa de Saboya, who suffered from phthisis and needed all kinds of remedies until his early death at age 26; the second theory defends that it was given the name of Queen Mother in honor of the second wife of Felipe V, Isabel de Farnesio, who, like María Luisa, was Italian as its owners and always relied on this as her trusted pharmacy to the detriment of the dubious royal pharmacists.

In 1914, this business moved to its current location at number 59 on Calle Mayor, on the ground floor of a building of the early 20th Century, very close to Calderón de la Barca’s House that we mentioned in some of our last posts. All the original structure and furniture of the pharmacy was moved to this new location so that the essence of the pharmacy remains intact: drawers and mahogany counters, wooden ceilings with old beams, precious ceramic tiles, old bottles with the drawing of the royal coat of arms and still with the name of their contents… making that entering this drugstore is like taking a leap in time into the past. 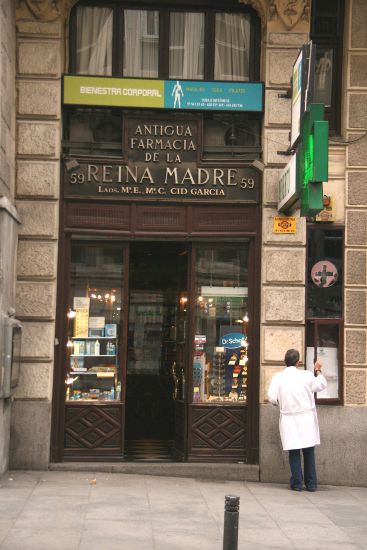 Among the relics that we find in the oldest shop in Madrid there are also original recipes on behalf of such illustrious characters as Miguel de Cervantes, an old scale for weighing babies, formulas of ointments, jars that keep all kinds of antiquated remedies such as mummy dust, which apparently was used to cure gangrene… but there are more secrets hidden between the walls of this pharmacy since in it we also find a passage that originally connected the pharmacy with the Royal Palace. At the present time the tunnel is walled up five meters from its entrance but in its day it was used to take medicines to the Palace and there is a legend that says that the famous nineteenth-century Madrid bandit Luis Candelas used it on some occasion to flee from the authorities.

But there’s more! If we go down to the basement of the pharmacy we can even see a piece of the old wall of Madrid. So remember this spot of our beautiful city because in the center of Madrid, besides being the oldest shop in Madrid … it is a real time machine!

Remember that if you want to continue on discovering many more curiosities and stories like this, you can join one of our Free Tour Madrid from Monday to Saturday.  We are waiting for you!