Sometimes shops can also be full of art and history and of course be part of the pulse of a city. In this article we talk about one of those shops: Juanse Pharmacy

Walking in central Madrid makes it easy to find some pleasant surprises that usually go unnoticed. In the heart of Malasaña neighborhood, cross of streets San Vicente Ferrer and San Andrés, there is a pharmacy that catches the attention of the wanderer. Founded in 1892, this 130 years old jewel has seen it all. From the Spanish Civil War, to the Second Republic, Primo de Rivera and Franco dictatorships, the post-war, or “la Movida” with Democracy, Juanse pharmacy has witnessed all the changes that subverted Spanish history. Even a popular writter of the Generation of ’27, Rosa Chacel, spent much of her childhood precisely in this building, as a plaque on the facade says. Moreover she has a novel (Barrio de Maravillas, title in Spanish) in which the two main protagonists, two little girls, live in this very same building as well.

The facade is full of tiles that are basically advertising posters. How was propaganda used a century ago? The cover later for any business was its physical location and main facade. The creative apothecary Juan José Cruz García Rodríguez (Juan José, “Juanje”, hence the name) decided to decorate the laboratories with these tiles in 1925.

There are miraculous remedies such as “diarretil” (easy to translate) or “lombricina” (lombriz means worm in Spanish). Certain, clear, unequivocal and straighforward! But there are also products for the high society like “odantálgico Juanse” (for the teeth). Advertising that nowadays sound like a rip-off was as explicit as we see it here. 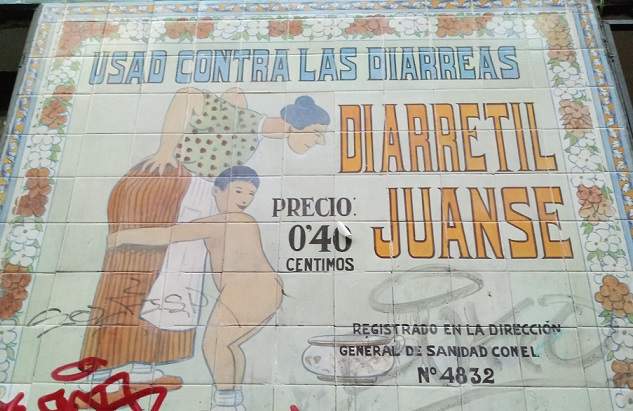 Many of this type of tiles were plastered during Franco’s Dictatorship to avoid paying a tax on outdoor advertising. Those of Juanse were uncovered again in 1960. It’s a pity that some people write “graffiti” on them, despite the different owners investing thousands of euros to clean and renovate them.

Juanse pharmacy was open until 2013 and until few months ago there was a cafeteria that also sold gourmet products. It’s only meters away from Plaza Dos de Mayo, heart of Malasaña, opposite a very popular coworking space and the emblematic bar Casa Camacho. The later is also very popular in the neighborhood and formerly was a liquor store. Malasaña doesn’t lack a thing!

To find out more about Madrid and truly discover our capital, we invite you to take part in our Free Walking Tour Madrid where we talk much more about the old shops of the city. Among many other things, we talk about the oldest restaurant active restaurant in the world. What do they all have in common? Feel free to join us!

The Elf of The Retiro Park, a very special gardener
La Paloma Festivity and the Chotis
Calderon de la Barca House and Other Great Writers
posted under: Curiosities, Madrid