“Parque de la Montaña” passed from a barracks destroyed in the Spanish Civil War to a public park with an Egyptian Temple from where you can enjoy one of the most famous sunsets of Madrid.

Nowadays the Parque de la Montaña (Park of the Mountain) is mostly known because there we find the Temple of Debod and also because it has become one of the most emblematic places to enjoy the beautiful sunsets of Madrid. However, if we’d go back to the 19th century, in the also known as “Principe Pío Mountain”, we’d find an old military barracks that ended up being destroyed during the Spanish Civil War. But, apart from this, some other events of great historical relevance have changed this area of Madrid a lot during the last centuries.

Originally the Príncipe Pio Mountain was part of a land that occupied a much wider space than nowadays; apart from the hill where we find the Parque de la Montaña, it also took the areas of Parque del Oeste, La Florida and Argüelles. At that time this property was located in the outskirts of Madrid. Already in the 17th century the estate was acquired by the Marquis of Castel-Rodrigo and, starting the 18th century, Juana de Moura (V Marquise de Castel-Rodrigo) married the Príncipe (Prince) Pío de Saboya. The mountain took its name from this italian aristocrat, up to the present day. Under the reign of Charles III the property, which had a palace, orchards, livestock, gardens and fountains, was included within the wall that surrounded Madrid. By 1792 it was acquired by Carlos IV and it became part of the Royal Site of La Florida.

It was at the beginning of the 19th century when Príncipe Pío Mountain was stained with blood for the first time. After the uprising against the troops of Napoleon, in the early hours of the 3rd of May of 1808, forty three citizens of Madrid were shot in there. This violent event was depicted in the famous painting by Francisco de Goya “The executions of May 3rd”, set in this Hill.

Later, Fernando VII gave this lands to his brother Francisco de Paula and it was then when this place was chosen to organize the Agricultural Exhibition of 1857. At this time the area suffered the biggest changes in its landscape: the Mountain got separated from La Florida, the land was leveled and part of it became a public park while in the area of the old Palace, the building of the Northern Railway Station (the current Príncipe Pío Station) started.

Shortly after the beginning of the construction works of the Station, a large military barracks was built on top of the mound where today we find the Parque de la Montaña. The old Cuartel de la Montaña (the Mountain Barracks) was a big fortress made in brick and granite, with enough room to hold up to 3,000 soldiers.

Already in the 20th century, the Príncipe Pío Mountain witnessed a virulent event once again. The day after the starting of the Spanish Civil War, on the 19th of July of 1936, General Fanjul, in charge of the fasctist uprising in Madrid, took the barracks and declared a state of war. Fanjul joined about 1400 soldiers in revolt along with 180 other Falangists. But while waiting for reinforcements, the troops still loyal to the Republican government assaulted the barracks and quelled the rebellion. This first battle ended with hundreds of deaths and an almost completely destroyed barracks. The building was too so close to the front line during the rest of the Civil War and continued to receive projectile impacts during the war, so it was reduced to a set of ruins.

Under the Franco dictatorship, the site was left in ruins for decades. Different options for the land were weighed, such as the construction of a new ministry or the creation of the House of the Falange, but due to lack of resources none of these projects came to fruition; until the 1970, when the space was ceded to the City Hall of Madrid to create gardens and rebuild the Temple of Debod, in the same spot where the old barracks was. This Egyptian temple had been shipped to Madrid by pieces, as a gift given from Egypt to Spain, for the help provided by the Spanish during the archaeological excavations of Nubia. The Mountain Park together with the temple was finally inaugurated in 1970. 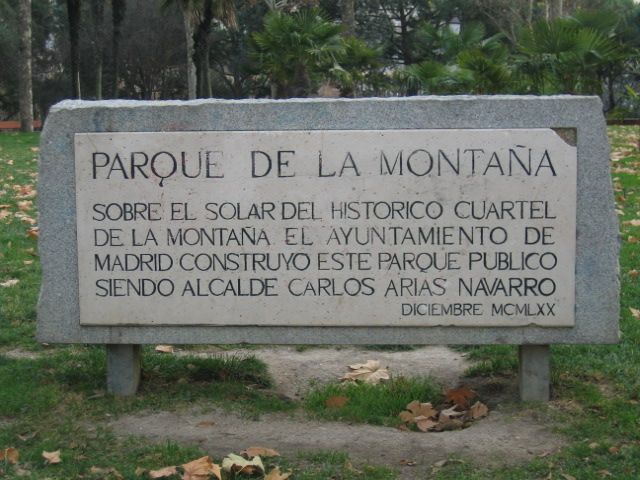 In addition, in the park we also find a statue dedicated to “the fallen ones in the Montaña Barracks”, something that reminds us that despite its playful transformation, this place has witnessed all kinds of events and some of them were not such happy ones. In spite of this, today we’re lucky enough to be able to enjoy in here one of the most beautiful parks of the city, with one of the most spectacular viewpoints to enjoy Madrid’s sky at sunset and… even better, with an original Egyptian temple right in the heart of our city!

Remember that if you want to keep on discovering many more stories like this one, you can join one of our Free Tour Madrid from Monday to Saturday. Looking forward to see you in Madrid!