In Madrid there is a surprise on every corner. We also have to consider that many great characters in our history wandered through its streets or directly lived here. One of them was Calderón de la Barca, who said: “Madrid is a home for everyone, because in its small world, foreigners and naturals are children of equal affection”. Speak of the devil…

The houses where most of the greatest writers of our literature can be found in the “Barrio de las Letras” (District of the Letters). But if we walk across Calle Mayor until number 61 we’ll stumble upon this commemoration:

So Pedro Calderón de la Barca House is there! The playwright and poet lived here from 1663 to 1681 right up to his death! In 1859 the building was in a dilapidated state and it was meant to be demolished. The workers were already at it but Mesonero Romanos appeared in the scene. Let’s digress for a momento. This man is perhaps the most notable chronicler of Madrid. Years ago, he had already tried to save Cervantes’ house to no avail. Revenge time! 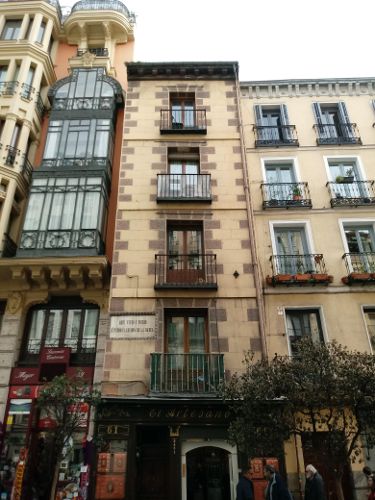 After insistenly pleading the demolition brigade to stop the works, the workers started to hit the walls and Mesonero started beating them with his stick. Everybody busy. The historian stayed up the whole night in front of the house to keep it safe. In addition he asked the people of Madrid, his contacts in the city council, the government and even the queen Isabel II for help. Calderon de la Barca House got spared but the owner was allowed to build two more floors.

Nowadays there are normal appartments and we even saw one of them for renting on the internet. Wouldn’t it be cool to live in the house of the man that wrote Life is a dream? There must be something in the air.

The building is also known for being one of the narrowest in Madrid, being only a little 4.32 m wide. Nonetheless there is one that is more narrow in number 59 in the same street being only 3.60 m wide. But in between in number 59 there is the shop in Madrid, Farmacia de la Reina Madre. It’s a pharmacy from…1578! But if we walk up the street a bit more, there is a red building on the left with a Carrefour supermarket and a commemoration that says: 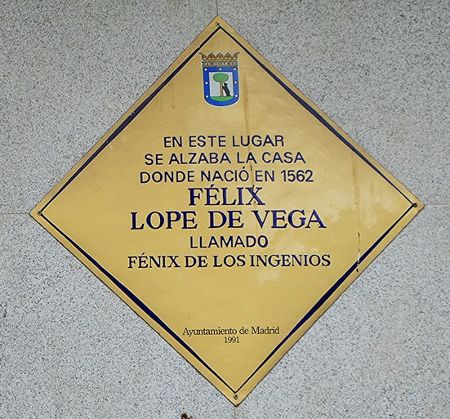 Yep, Lope de Vega was born in a house that used to be exactly here. It’s hard not to imagine these two distinguised costumers going to the pharmacy. No less than Lope de Vega and Calderón de la Barca, that probably are the best playwrights of the Spanish Golden Age.

That said, the narrowest house in Madrid is a bit closer to Puerta del Sol, in number 6 of Calle de Postas. It’s only 3.12 m wide and it’s a shop from 1867. Even Benito Pérez Galdós mentioned it in his pinnacle novel Fortunata y Jacinta. The mezzanine used to be a part of the shop, the first floor the kitchen, the second the bedroom, and the third the bathroom. That’s some good space management! 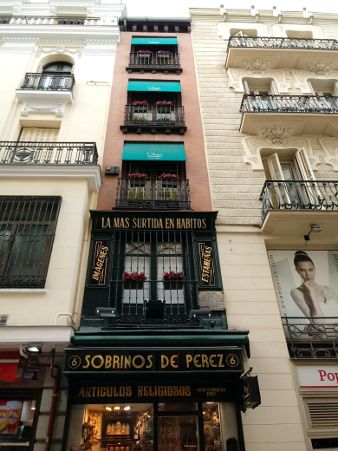 In the 19th century there is no Paris without Balzac, no London without Dickens and no Madrid without Galdós. If you want to find out more about Lope de Vega, Calderón de la Barca or Benito Pérez Galdós, don’t hesítate to join our Free Tour Madrid Barrio de las Letras (only in Spanish), or our Free Tour Madrid to know more about the area mentioned in the article, where you’ll also get to know about what the shops in Madrid that are at least one century old have in common.

The Tram of Madrid - Life Before Metro
Viaduct of Segovia - Awesome views and a lot of curiosities
Chocolatería San Ginés | A Historical Place
posted under: Culture, History, Literature, Madrid