The calamari sandwich is one of the highlights in Madrid’s culinary offer, but if we take a look at other places in Spain the truth is that, in most of them, it’s not such a famous sandwich. The thing is that at some point this delicious sandwich became a very typical dish in our city. But how does a sandwich made with squid become a traditional meal in Madrid, an inland place?

The truth is that the exact origin of this “delicacy” is not entirely clear, but we do know a number of circumstances that over the past centuries have probably caused the deep fried squid to become an essential product in our gastronomy.

There’s evidence of the arrival of fresh fish from the Cantabrian Sea to Madrid already in the 16th century. But the distances were too long and the transportation too slow, so getting that fish to Madrid in good condition wasn’t an easy task. At that time the fish was transported by mules, placed between blocks of ice that were created in the winter by accumulating snow in the wells. But the transfer could last 11 or 12 days, so sometimes the fish didn’t arrive in Madrid in good condition. That’s why still in the 16th century the most common fishes you could eat in Madrid were those that before being transported went through some process that made them less perishable, such as dried fish or salted fish.

The calamari sandwich didn’t exist in Madrid yet, but a great demand for fish started, especially due to dietary restrictions imposed by the Catholic Church at certain times of the year, such as Lent, during which you could not eat meat. This made it necessary to fill this gap with other alternatives, such as fish. The growing demand in the 18th century caused the merchants to ask the Crown for special permits and improvements in the routes in order to transport fish and shellfish from the northern ports to Madrid. Then the transportation time got shorter, so more variety of fish arrived, and in better conditions.

In the 19th century, with the creation of the railroad, the transportation of fresh fish became even easier. Also in this century, the great cultural influence coming from Andalusia could explain the introduction of the battered squid in Madrid’s gastronomy. The migrations from southern Spain brought to Madrid the Andalusian taverns and also new ways of cooking the fish, such as deep fried or battered. 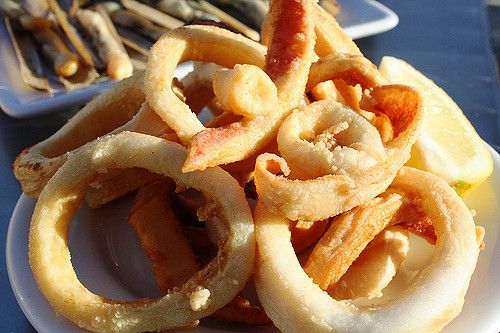 Another migratory movement that maybe influenced this process was the arrival of a lot of cooks from provinces of northern Spain (by the Cantabrian Sea) who knew well how to cook fish and other seafood. Many of these cooks ended up opening a lot of restaurants in Madrid, and they tended to use the less expensive fish and seafood. In that sense, a product with little waste (spines, skin, etc.) like the squid was a good option and also the lack of spines made the calamari a perfect option to be eaten in bread.

What seems to be clear is that it was already in the 20th century when the calamari sandwich became a classic in Madrid. In the 50s the calamari-sandwich-bar par excellence, El Brillante, opened its first establishment in the city. And also at that time the sale of these sandwiches became popular in bars located near the Plaza Mayor. Finally this succulent snack, tasty, fast and cheap, was established as one of the favorites among the youngsters of Madrid. 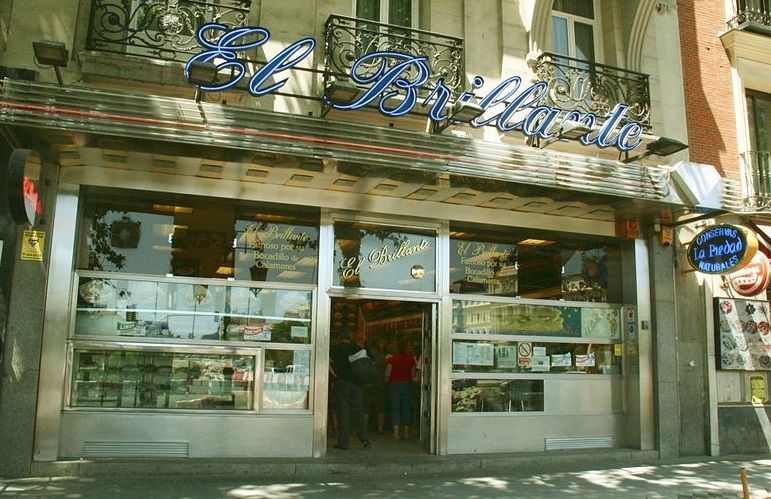 And so to the present time, when the calamari sandwich has become part of the culture of the city (and if it comes together with a beer, even better!). It has acquired so much fame that even the tourists who visit the Capital of Spain dare to throw themselves into the Calamary Sandwich Experience! The good news is that nowadays the supply of squid in Madrid is guaranteed, as our city has the second largest fish market in the world: Mercamadrid. Funny, right?

If you want us to give you some good recommendations to enjoy the best calamari sandwiches in Madrid (plus some other great stories about our city), remember that you can join one of our Free Tour Madrid from Monday to Saturday. Looking forward to show you more about Madrid!

Chulapas and Chulapos of Madrid
The Oldest Shop in Madrid: Farmacia de la Reina Madre
The Traditional Madrid. What`s the origin of our identity?
posted under: Culture, Gastronomy, Madrid